26442 Determining the vibration frequencies of a pump for a high-density fluid
Richtingen: Master of Science in Electromechanical Engineering

SCK-CEN is developing a research reactor as prototype for the 4th generation of nuclear reactors. It was named MYRRHA (Multi-purpose hYbrid Research Reactor for High-tech Applications) and it has several advantages, such as increased safety and reduced nuclear waste through transmutation. The reactor is scheduled to be commissioned in 2036. 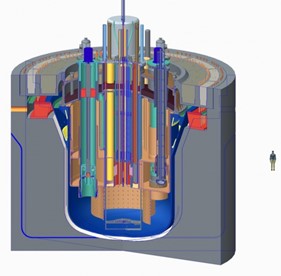 MYRRHA will use Lead-Bismuth Eutectic (LBE) as primary coolant. Two primary pumps are used to cool the nuclear reactor and they circulate the primary coolant between the nuclear reactor core and the heat exchangers. LBE poses several challenges that need to be considered during the design phase of the pump. It is corrosive and erosive, which limits the flow velocities within the pump. Furthermore, it has a very high density (about 10 times that of water), which alters significantly the dynamic behavior of the pump. Due to the added mass effect, by which the heavy liquid adds inertia to the structural inertia, the natural vibration frequency of the pump rotor and the associated damping will change compared to a vibration analysis conducted in vacuum. As a result, the typical approach to compute the natural frequencies of the blade vibration in vacuum will not yield accurate results.

As the typical approach to compute the natural frequencies of pump blades will not provide accurate results when a pump comes into contact with LBE, this approach needs to be replaced by a coupled fluid-structure interaction simulation approach. A tight coupling between computational fluid dynamics (CFD) and the finite element method (FEM) for structural mechanics is needed to identify these eigenfrequencies and such a coupling can be created using the in-house code CoCoNuT. This thesis aims to develop a methodology to determine the eigenfrequencies of pump blades in operation with LBE. The student will use numerical tools to calculate the vibration of a rotor, and will interpret the results. Based on this analysis, recommendations will be provided for the final design phase of the pump.