A large number of industries use an evaporator to produce steam. One the most frequently encountered geometries in industrial applications is the shell-and-tube heat exchanger shown in Figure 1. Here, heat is transferred from the fluid in the tubes to the fluid located between the tube bundle and the shell or vice versa. The dynamic load caused by the mixture of a gas phase and a liquid phase – therefore called two-phase flow – possibly leads to vibrations resulting in fretting and fatigue damage. Another example of such tube bundle geometries is the steam generator of nuclear power plants, where fretting and fatigue damage can lead to steam tube rupture. This is a safety issue that can lead to prolonged reactor shutdown associated with very high economical costs. 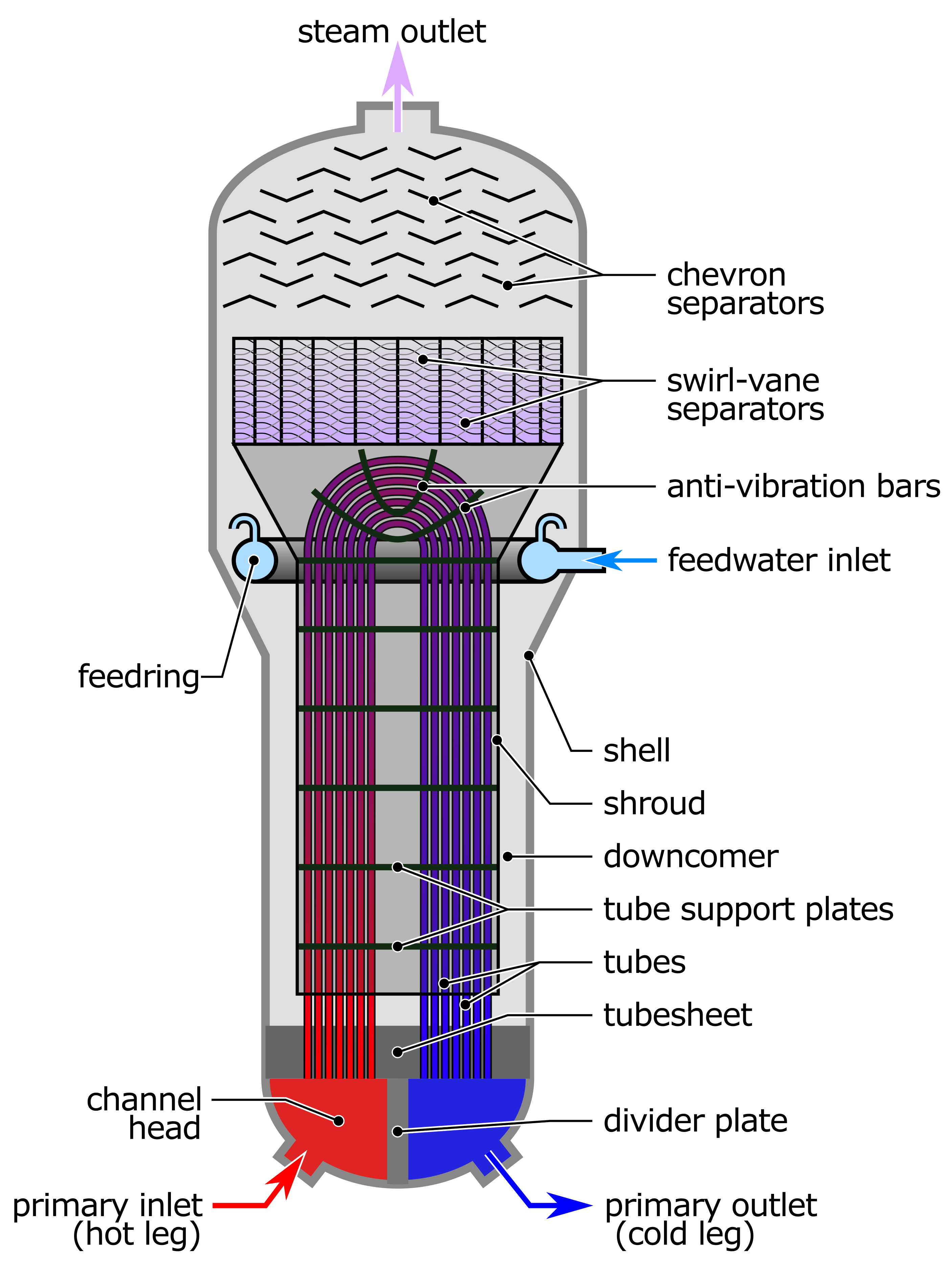 Thanks to the vast increase in computational power over the past decades, CFD calculations on two-phase flows became feasible, which has sparked the interest of many researchers worldwide. As a result, two-phase flow simulation is a very lively research subject, not only because of its potential to improve the design of widely used heat exchangers but also because the fundamentally different behavior of two-phase flow compared to single-phase flow is not completely understood yet.

The most severe vibration issues occur at locations with cross-flow, like the central part of a shell-and-tube heat exchanger or the U-bend section of a steam generator. In this thesis, we will investigate a tube bundle subjected to two-phase cross-flow, where one of the tubes is mounted in a way that vibrations are possible.

A challenging part of two-phase flow simulations (as well as experiments in fact) is the modelling/control of the flow regime at the inlet, which is of vital importance for the accuracy. This usually requires long precursor domains which result in high computational costs. A synthetic bubble model (SBM) has been developed in our research group, which proved to be an accurate and efficient alternative to precursor domains. However, inlet conditions for two-phase flows (both numerical and experimental) still have some uncertainty associated with them. In this thesis the effect of these uncertainties on the output quantities of interest (vibrational behavior) will be taken into account using efficient Uncertainty Quantification methods with which we have experience in our research group.

The geometry under investigation is a 3x5 rod bundle in cross-flow, with two rows of half cylinders at the side (see Figure 2). The central rod is mounted such that it can vibrate. 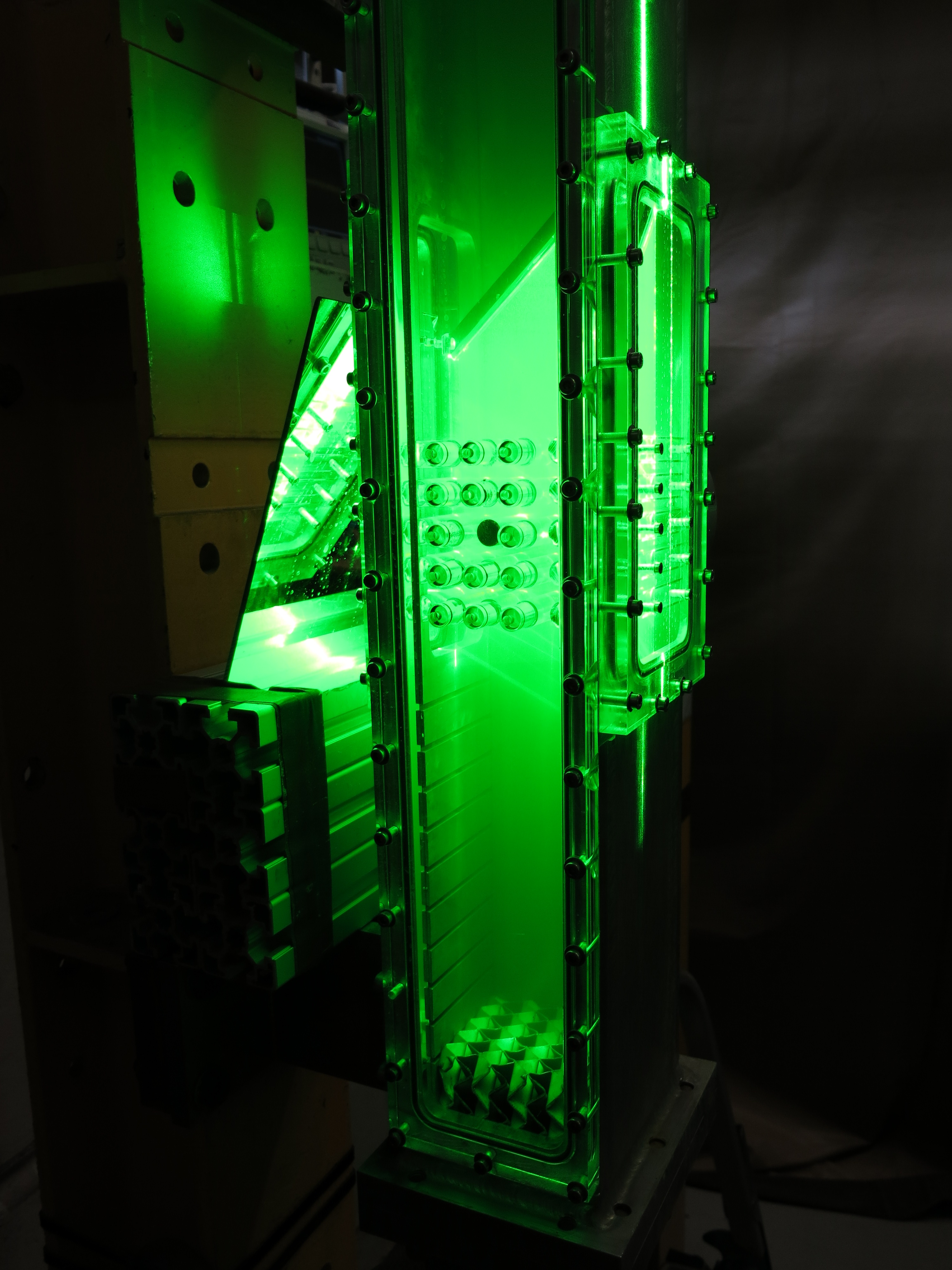 In a first step, single-phase simulations will be done using Reynolds-Averaged Navier–Stokes (RANS) turbulence modelling, to validate the CFD model against the experimental data. After that we will continue with two-phase simulations using a Volume of Fluid (VOF) method to take into account the two phases, complemented with the SBM inlet model. We will do this for both a 2D and 3D mesh to see whether the difference is important. A third step is doing a study in which the uncertainty of the input parameters is propagated to the output quantities of interest, using efficient methods like Polynomial Chaos Expansions.

In short you will: