Conventional electrical traction motors for automotive applications are usually equipped with a water jacket to evacuate heat form the motor. Although the water-jacket is cost effective and well performant, its main drawback it the high thermal resistance between the water and the main heat source (the windings). By use of a dielectric fluid, such as oil, the fluid can be contact with the copper winding and as such significantly reduce the thermal resistance between the coils and the fluid. One of such direct stator cooling method is ‘oil jet cooling’. In this concept the oil jet is impinged on the end-winding of the electric motor. Although frequently implemented in existing electric drive trains (such as Tesla Model 3), the modelling of oil jet cooling is a challenge. Therefore, the cooling concept has to be extensively tested on a dedicated test bench. In the figure below, an exmple is shown of such dedicated testbench build by NREL in the USA (https://www.nrel.gov/docs/fy20osti/74284.pdf). Although, this is provides a lot of insichts in the oil jet cooling of electric motor endwidings, the results are not applicable to Dana's state of the art electric motor end-winding technology (hairpin winding). 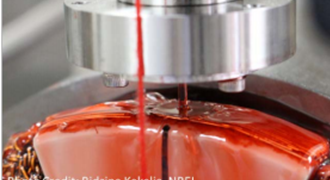 Dana and Ugent are currently developing a testbench in order to accurately test the thermal performance of oil jet cooling for hairpin electric motors. In the figure below, a schematic overview of the testbench can be seen. The testbench consists out of a sector of an electric motor end-winding, which is energized by a current source. The test section will be installed in a calorimetric chamber. The oil inlet and outlet temperatures will be accuratly monitored, along with the internal tempertures of the device under test.

The goal of this master thesis is to build up and commission the testbench, and to test and analyze the performance of such oil jet cooling. In a first part, a study will be made to investigate empirical jet and fluid film cooling correlations in the literature. Secondly, the testbench measurement accuracy will be assessed by performing a series of test on the unit. In the last part of the project a design of experience will be made, the test results will be analyzed and an empirical correlation will be developed to model the jet cooling concept.