The cerebrospinal fluid (CSF; visual in white in fig 1) surrounds the brain and spinal cord. It provides a mechanical barrier against shock, and plays a role in brain homeostasis. CSF is produced in the brain ventricles and is eventually up taken into the venous circulation. An important anatomical point in the CSF circulation is foramen magnum, an opening at the base of the skull, where the brain stem connects the brain and the spinal cord. Pressures are typically low, in the order of a few mmHg. CSF dynamics are highly influenced by postural changes and other factors leading to blood pool shifts (respiration, arterial pulsations, venous pressure changes), but in normal subjects, such shifts are accommodated for. Chiara malformation type 1 is a congenital and structural defect of the skull and cerebellum, characterized by a descent of the part of the cerebellum (the tonsils) through the foramen magnum (fig 1.). It occurs in approximately 1 in 1000 births, with a somewhat higher prevalence in females. Normally, only the brainstem passes the foramen magnum and connects the brain with the spinal cord. This descent (also called herniation) of the tonsils leads to interruption of the circulation of the fluid surrounding the brain (cerebrospinal fluid, CSF) and often results in the formation of a cavity in the spinal cord, filled with fluid, which is called a ‘syrinx’, or the condition known as ‘syringomyelia’ (fig. 2). The enlargement of the syrinx stresses the spinal cord and leads to severe neurological deficits. At present, patients are ultimately surgically treated, but the intervention is risky. 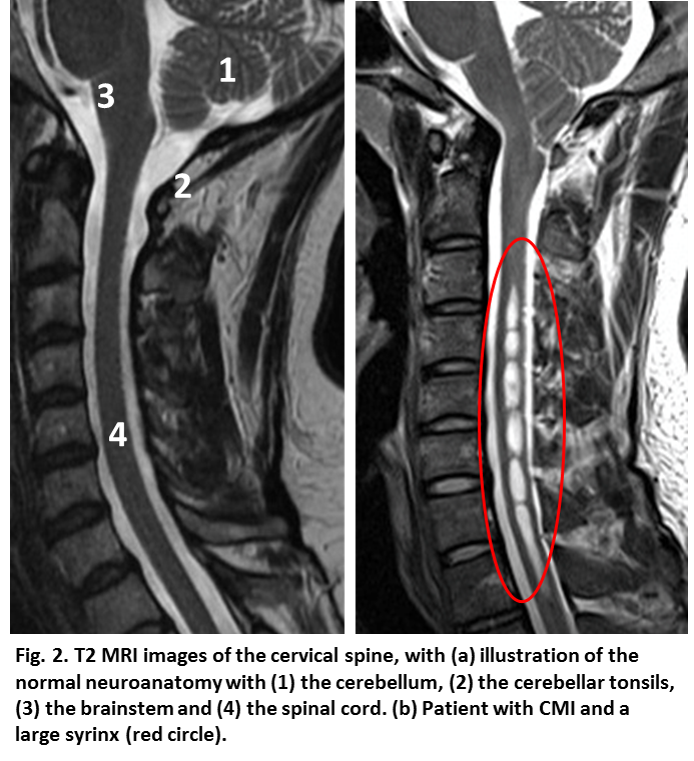 Several hypotheses have been postulated over the last decades regarding the mechanism behind this ‘Chiari-Syringomyelia complex’, but the exact pathophysiology remains unclear.

The aim of this project is to use computational tools (finite element analysis and/or computational fluid dynamics) to understand (i) the mechanical deformation of the brain, how cerebral tonsil deformation can lead to an obstruction of the foramen magnum, and what forces would be required to achieve that level of deformation assuming the brain as a poro-elastic medium; (ii) forces/pressures that would be required to cause syrinx formation in the spinal chord; (iii) models of CSF flow and soft tissues of the central nervous system in the normal setting and in Chiara malformation. The insights and quantitative data achieved from these models will contribute to novel treatment options for patients with Chiari-type 1 malformation, but may also serve to understand neuro-biomechanics in microgravity and the association between cardiovascular effects of ageing and neurodegeneration.